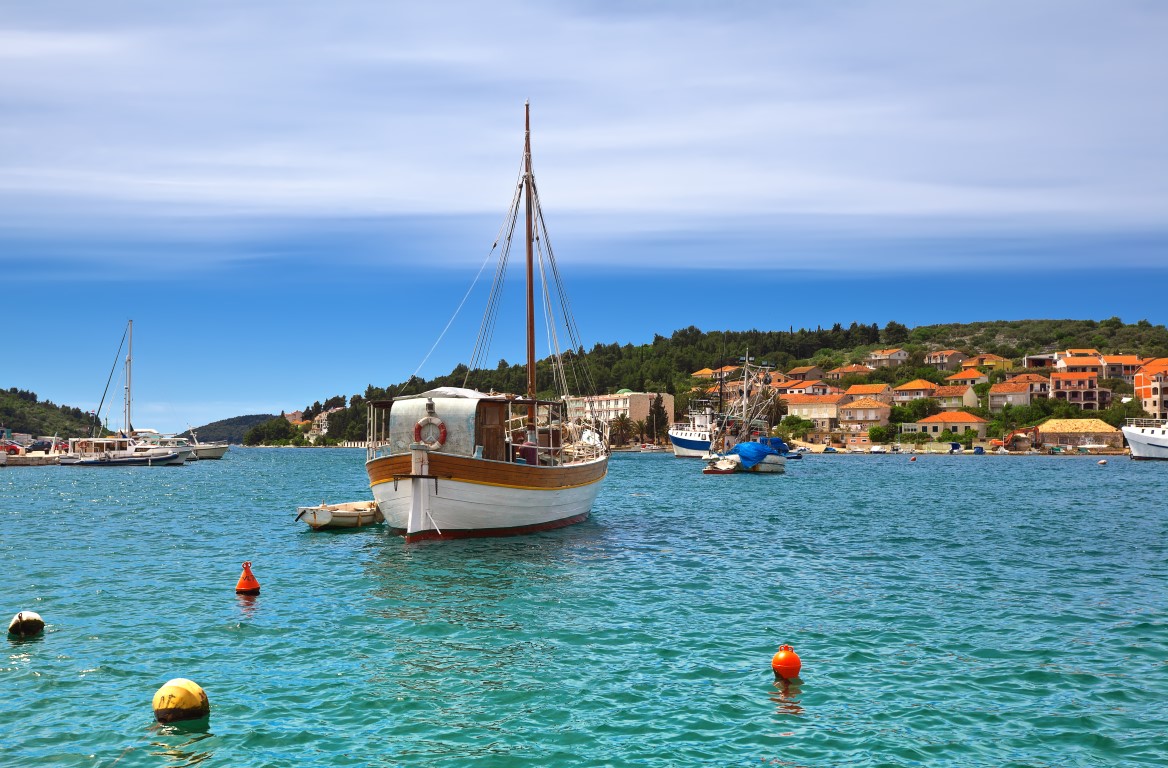 Vela Luka is situated in the western part of the Korčula island, in the bottom of deeply cut spacious bay, indented with numerous smaller bays. With its 4 500 residents Vela Luka is the second largest place of the Adriatic islands, a perfect safe harbour and a port for sailors. It is the residence of many talented artists and musicians, a place where tradition and hard work is particularly cherished.

Cultural centre, found in the very centre of the settlement, next to the St Joseph Parish Church, comprises museum, gallery, town library, and the wealth and diversity of the Vela Luka historical, cultural and artistic heritage presented through several valuable museum collections: archaeological collection, international gift-collection of drawings, graphics and small sculpture, and a collection of small ship models carved in wood. Vela Luka is truly a sanctum of artists, painters and sculptors, poets and song. “The most beautiful cove in the world”, as locals like to call it, is a home-town of many renown artists like the sculptor, painter and a poet Izvor Oreb, poet Danijel Dragojević, late academic Šime Vučetić, sculptor Ante Marinović, conceptual artist Gorki Žuvela and widely known pop-singers Oliver Dragojević and Jasna Zlokić.
Indigenous Dalmatian song must have been born in Vela Luka since people here treasure musical art in particular. Still very much alive, perhaps the best conveys the spirit of the locals through several local klapas – “Vela Luka”, “Ošjak” and “Leut”, but others too. Yet, maybe the most memorable scene one can meet is when a couple of the oldest local people gather spontaneously to sing some song, “for old times’ sake”, from the bottom of their heart and for their soul only, but to the satisfaction of all passers-by!
Traditional Vela Luka dances “mafrina”, “četiri pasa”, “tanac”, “pritilica”, “šega-šega” and especially attractive dance with swords “ples od boja”, better known as “kumpanija” has been nurtured for decades thanks to the Kumpanija Folklore Society. Kompanija is an ancient knight game which originated from the organized people’s army, which used to defend the island from various conquerors, invaders and similar. This specific knight game is performed almost exclusively on the Korčula island during religious and state holidays. The main performance takes place on 19 March, St Joseph’s Day, who is the patron saint of Vela Luka.
Azure sea, supreme gastronomy, excellent season and off-season fun, makes Vela Luka a perfect destination for all the visitors who would additionally like to experience the charm of attractive walking paths and cycling tracks, not to mention daily trips to Dubrovnik, Hvar, Korčula, Split and some other interesting locations.