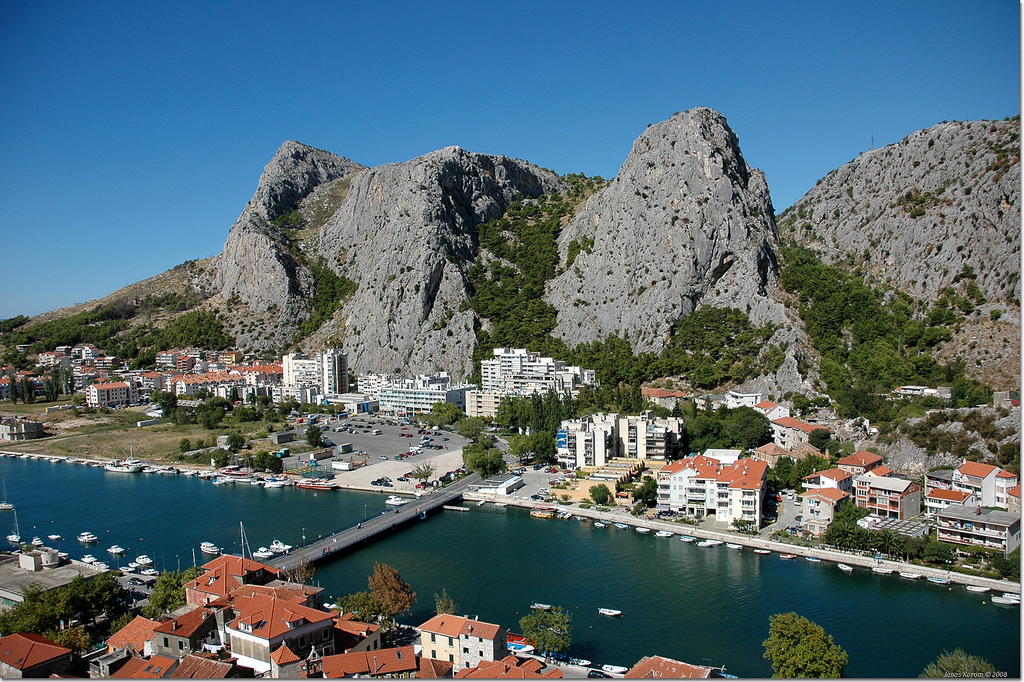 History of Omiš
The first mention of the Town of Omiš dates back to the 10th century. Its favourable geographical location ensured its safety in the past, and today it stands for a unique attraction on the Adriatic coast. It is a historic centre located on the east bank of the Cetina River.
In the ancient times the settlement was located further to the north, in the Baučići hamlet. It is believed that the name comes from the Slavic word Holm/Hum, meaning a hill, a place on a hill, or that Oneum was named after the Cetina River which was colonised by Greeks who named its lower course Nestos, out of which the town’s name Oneum is derived. The Medieval town was called Olmissium, Almiyssium, and during the Venetian rule, Almissa. Today’s name Omiš is derived from the said medieval word.
This was the time when people from Omiš were well known pirates. The location of the town itself attributed to this, and so did their light and fast boats. During the most complex operations they were led by the Kačić knights. Unfortunately, every time the truce was agreed upon with the pirates, it was short-lived. After the Kačić’s, the rulers of Omiš kept changing, and although the townspeople were still pirates, they were never as efficient as they were during the Kačić’s rule. Some of the rulers included the Šubić knights, Horvat brothers, Hrvoje Vukčić Hrvatinić, Grand Duke of Bosnia, Ivaniš Nelipić, Governor, Matko Talovac’s family who was granted power by King Sigismund, and Stjepan Kosača, Bosnian Duke.
You can see all of the aforementioned for yourself, and many more when you visit the Town of Omiš and its cultural and historic heritage from the said times.

History of Poljica
The Poljica Republic was located between the two rivers, Cetina in the east which formed a natural boundary with the Town of Omiš, and Žrnovnica in the west.
Poljica encompassed a 250 square kilometre area, and was divided into 12 villages. Taking Mosor Mountain into consideration, it consists of Upper, Middle and Lower Poljica.
Nowadays, the larger part of the former Poljica Republic belongs to the Omiš Municipality, and the remaining part to the Dugi Rat Municipality.
Poljica was organised as a ”peasants’ republic” which was closely related to the Poljica Statute from the 15th century and the common law kept in the Omiš Town Museum.
The Poljica Statute, in addition to the Vinodol Codex, is one of the oldest and most important Croatian historical legal statute, written in the Chakavian dialect.
The proof that democracy existed in the Poljica Republic was the National Assembly which consisted of the public who directly made crucial decisions when necessary.
Apart from the National Assembly, the sovereignty also lay in the hands of the Assembly of Poljica nobles and dukes. This Assembly elected the Poljica Duke in Gata at the foot of the Gradac Hill, on the St George’s Day who is also their patron saint.
There is a long cultural history in the Poljica area, from the late antique villae rusticae in the Ostrvica village, and the remains of the early Christian church in Gata from the Justinian’s time, to the Poljica Museum and preserved churches.
.

Ice cream in winter – why not?
Opstojnost crkve svetoga Vlaha