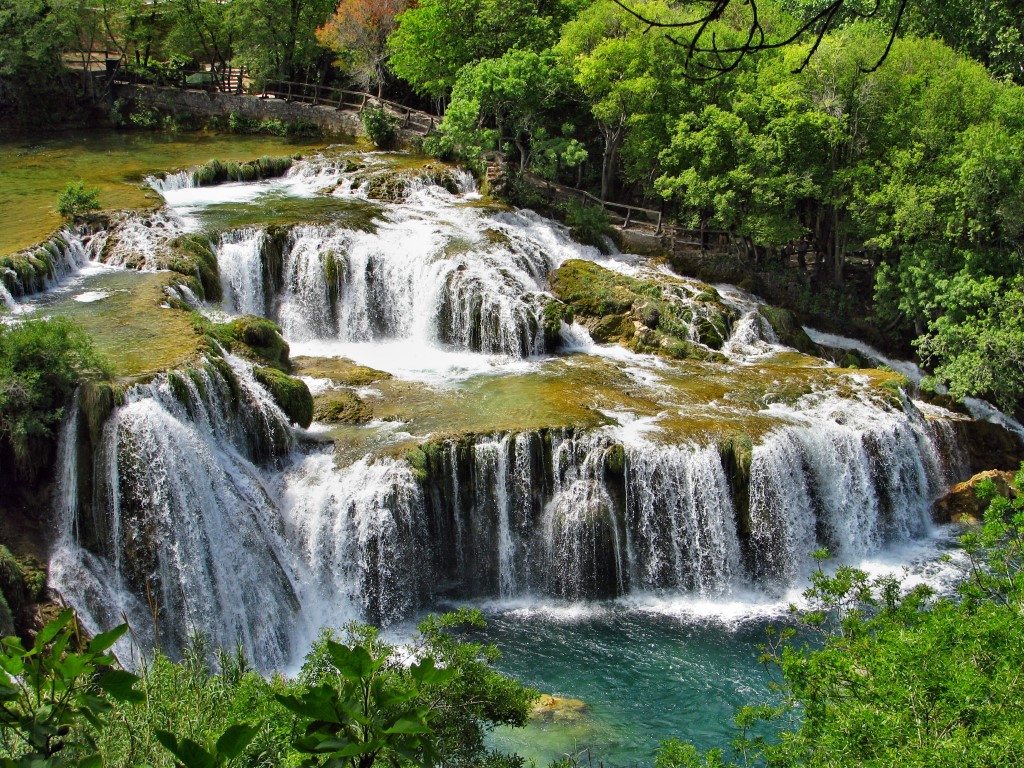 Roški slap is the sixth, penultiumate waterfall on the river Krka, located at the National Park of Krka. Along with other waterfalls of Krka, it is regarded as one of the most enchanting natural beauties of Croatia due to its nature.
It is situated 14 kilometers downstream of the waterfall Miljacka. It is named after the fortress Rog (horn), of which there are very few remains. It is particularly interesting for its series of small cascades also known as Ogrlice (Necklaces) found at the start of the travertine barrier. The waterfall is also famous for its rich vegetation, mills and mortars.
The barrier is 650 meters long, 450 meters being its maximal width with height difference of 22,5 meters.
The main waterfall is 15 meters tall, whereby Krka falls like fan into the Visovac lake.
The Roški slap hydroelectric power plant was built in 1910 on the right bank of the waterfall.
Waterfalls naturally occur on rivers on places where water flows over a vertical drop in the course of a stream, i.e. on those places with sudden changes in relief elevation. The reasons of these abrupt changes in relief could be related to tectonic nature, specifically, to a short process which occurs during an earthquake. It could also be connected to different lithological content of two rock masses, whereby downstream rock mass is less resistant to river erosion, i.e. water can remove particles faster than it is the case in the upriver.
Some waterfalls may result from sudden geological processes like land-sliding or volcano activity. There are also waterfalls which are artificially made, designed for decorative purposes by deviating the existing water flows or creating new ones by using water pumps.
Waterfalls of Krka have the same concept of startling beauty for Croatian people as the world’s most famous waterfalls like Angel Falls in Venezuela, the highest waterfall in the world, Niagara Falls that straddle on the international border between the United States and Canada or Victoria Falls between Zambia and Zimbabwe.