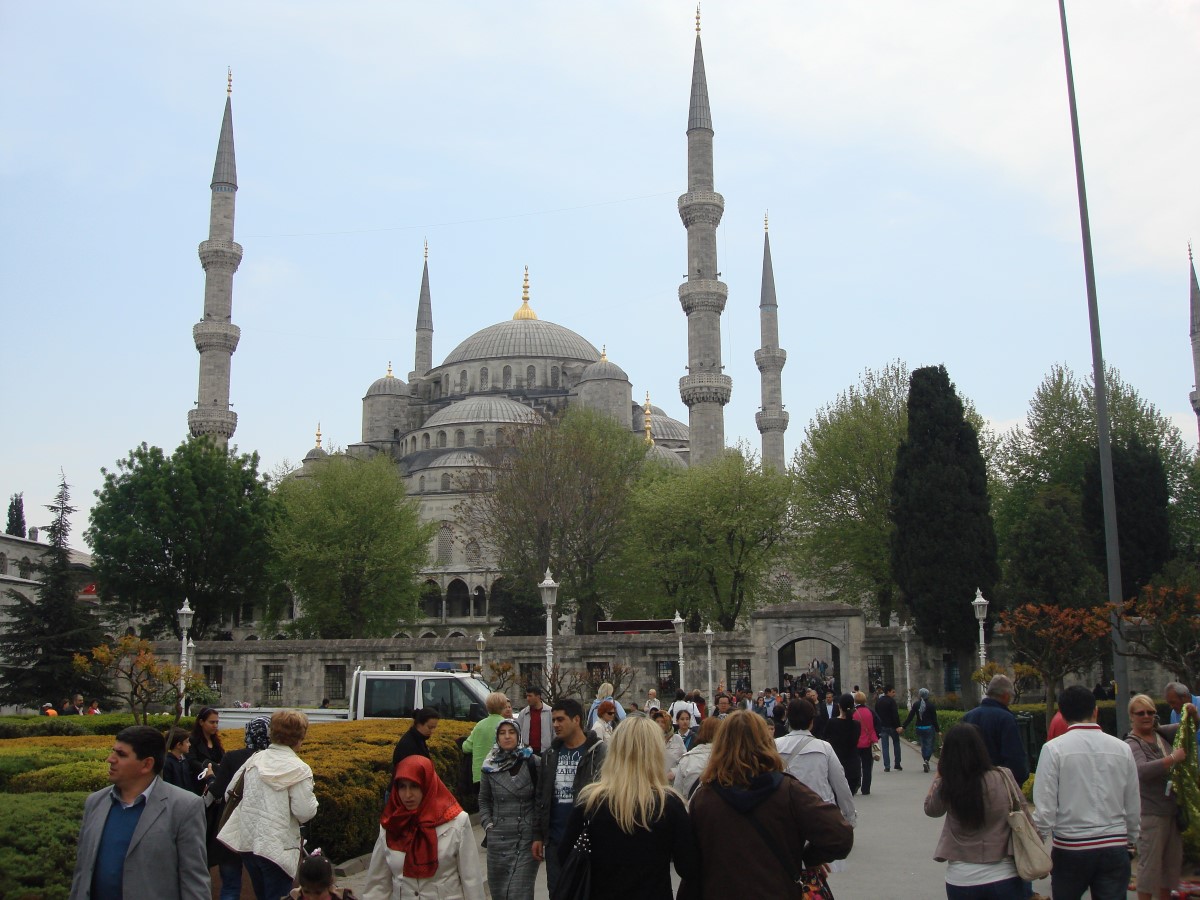 Many of you, like Croatian people, have probably watched a popular Turkish series “1001 Nights”, so when the opportunity came along I took it to explore a little bit more what is Turkish world really about, is it that different than mine.
Above all, Istanbul is a city of contrasts. On one hand you can see some of the world’s most renown and impressive landmarks, tall modern sky scrapers, malls and luxurious avenues, while on the other hand, a traditional way of life incorporates through other aspects like women’s clothing, some wearing tesettür, a head-scarf and light cover-all topcoat, while other are dressed in a usual European style. One can also experience his ears ringing from the noise made by the street salesmen, but enjoy the quiet in the parks next to mosques as well.

Hagia Sophia Church, or the Church of the Holy Wisdom found Instanbul is one of the master pieces of Byzantine architecture and art in general, once the largest church in Byzantine Empire, initially built as a church, later transformed into mosque to finally become a museum. It took only five years for its construction and it is considered as one of the architectural greatest achievements in the history of mankind.
Another breathtaking view is offered over the Blue Mosque (called Sultanahmet Camii in Turkish) with a distinctive cascading domes and six mosque towers (minarets). When entering the mosque one is obliged to take off shoes and cover with a scarf. And then… you enter into one of the world’s prettiest mosques, adorned with beautiful decorations on walls and ceilings. The mosque got its name after blue tiles covering the walls of its interior. It is also unique for its six minarets, since mosques at the time had four minarets the most.
The construction took place in 1609 when Ottoman sultan Ahmet I decided to build a big mosque that will surpass the beauty of Hagia Sophia. He named an Ottoman architect Sedefkar Mehmed Agha to run the projects of the construction and the whole process having lasted seven years, to be followed by the death of Ahmet I, at the age of 28, a year later after the mosque’s completion.

Another memorable experience was a visit to Topkapi Saray Palace (“Palace of the Cannon Gate”), constructed by the order of Sultan Mehmed II. This is indeed a remarkable example of Ottoman architecture containing valuable pieces of the emperor’s furniture, porcelain, clothes, weapons, illuminated inscriptions, frescas and jewellery. The Palace has four main back yards with hundreds of rooms and many smaller structures like mosques, hospitals, bakery and blacksmith workshop. Still, only some areas are open to the public.
Upon establishing friendly relations with the Europeans, a new Dolmabahçe Palace was built in a European style, that later become the central place of the Byzantine Empire. Being directed to the European side of the city, this palace served as the proof of their relation.
Istanbul is positioned at the south end of the Bosphorus. It lies on two continents, western being in Europe and eastern in Asia. Almost indescribable experience is a cruise trip along the Bosphorus (strait that forms part of the boundary between Europe and Asia) where one can absorb the view of enchanting palaces, fortresses and luxurious villas.

But, a few words more about the atmosphere of the Istanbul streets. First of all, you need to “watch your head” while crossing street, since there truly rules a traffic chaos, nobody pays attention to traffic lights, not even when you are allowed to pass, can you freely cross a street, since drivers constantly honk and yell at you, luckily you don’t understand them…

Many would agree shopping is a must- do on a trip, so you should definitely visit
Grand Bazaar, and remember, it is hardly to be missed, but very easy to get lost in it. Grand Bazaar is the largest covered market in Turkey, a genuine shopping paradise. It offers a range of Turkish carpets and rugs, clothes, jewellery, tea and coffee service and a large number of spices, and bargain is obligatory!
Another impressing destination is the Egyptian Bazaar or Spice Bazaar with its L-shape, that comprises numerous spice shops, tea shops, scented oils and all the similar stores one can imagine. Moreover, this is a heaven for sweet lovers who can enjoy Turkish delight or lokum, baklava (nut-filled multi-layered pastry), various candies, dried fruit, nuts… And don’t return home without a bag of high-quality Turkish coffee!
More than enough reasons to visit Turkey and Istanbul. Megacity like Istanbul will leave you breathless, captivate you with its rich culture and extraordinary cuisine: make sure you taste their kebab! But for a guaranteed shopping, fun here never seems to end… Now I am free to say I’ve visited Istanbul, the world so close to mine, yet so different.

Povijest, kultura i gastronomija Lumbarde
Take a stroll around Šibenik