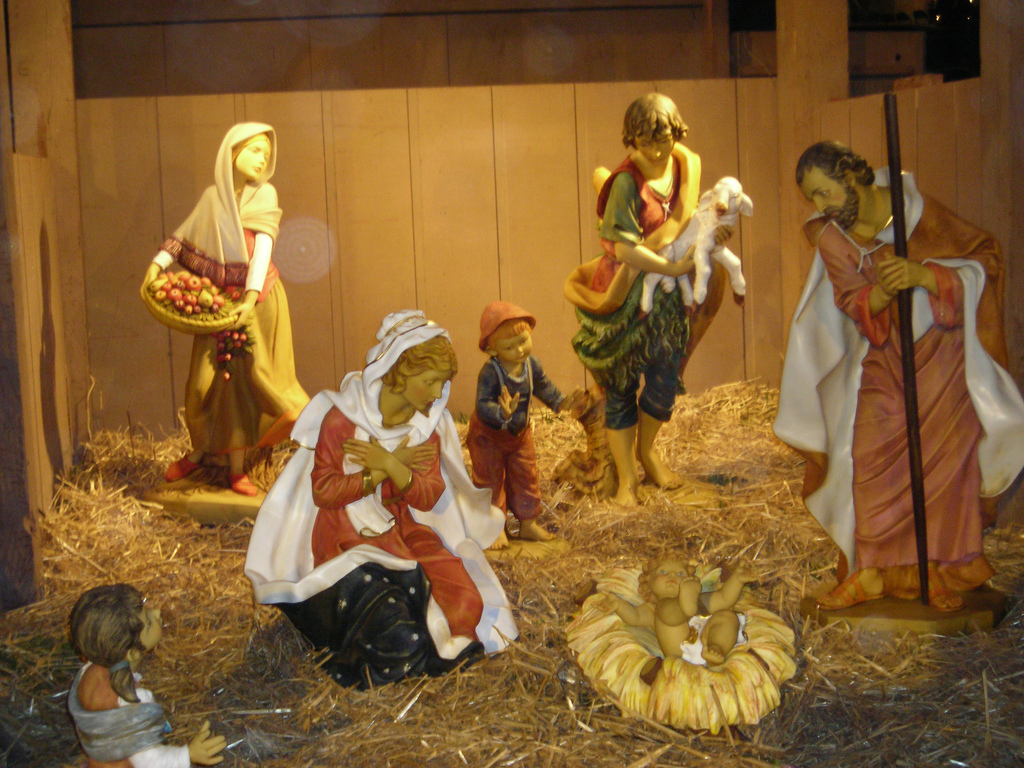 Christmas crèche presents the nativity scene of Jesus’ birth as described in the Gospels of Matthew and Luke. They include moving or standing figures of the Christ Child, Virgin Mary, saint Joseph and appropriate surrounding. More complex crèche includes other characters like shepherds, angels, three holy kings and other. There is also live nativity scene where people dressed in Mary and Joseph stand still while the living child in the manger represents Jesus. The ox and the ass are often a part of the Nativity Scene even though they are not originally mentioned in the Bible description. The crèche is usually assembled by the family on Christmas Eve where it stands until Epiphany or the Three Holy Kings holiday, which in the Church denotes the Baptism of Jesus. The crib in the present form and its use originated with St Francis of Assisi at Grecco in Italy in the y. 1223. The oldest Croatian crèche is kept on a small island Košljun near Krk, by the unknown author. Pope John Paul II has in 1982 initiated the tradition of displaying the Nativity Scene in Vatican in the St Peter’s Square in front of the Christmas tree. During Christmas time, the White house also celebrates Christmas by displaying Italian crèche from the 18th century. Among the famous nativity scenes in Europe are santons from Provance in addition to the Kraków’s Nativity Scene and the one at Naples.
The first nativity scene in Bethlehem, when Jesus was born, was attempted to be faithfully represented by the Christians centuries later. The faithful even painted walls of catacombs with the scenes from the Jesus’ life. There is also evidence that Christians have already honoured Jesus’ birth in Bethlehem. Speaking of this tradition in Croatia, it needs to be pointed out that the portal of the St Lawrence Cathedral in Trogir contains the relief of Jesus’ birth, which resembles the crèche, a work by master Radovan. The Nativity Scene in the form as we know it today came to Croatia in the 17th century. Dalmatia nourished the tradition of carolling which included carrying the crèche on the hands during the singing of Christmas carols. The Franciscans were very active when spreading the tradition of restoring the Nativity Scene is in question. In 2005 Dubrovnik begin to host International Festival of Christmas Creches and Customs. Ethnographic Museum of Zagreb each year organizes exhibitions that advocate the theme of Christmas where even artistic creches are displayed, made by Croatian artists like Ivan Lacković Croata, Josip Botteri, Kuzma Kovačić and others. Moreover, from 1985 Croatian artists participate in the international 100 Hundred Creche Exhibition in Rome that has a long-standing tradition. On the other hand, live Nativity Scene has gained on its popularity in Croatia over the last couple of years, so during Christmas period one can often enjoy live crèche on town squares across Croatia, similarly to the one in Proložac we have already talked about. D. Šabić