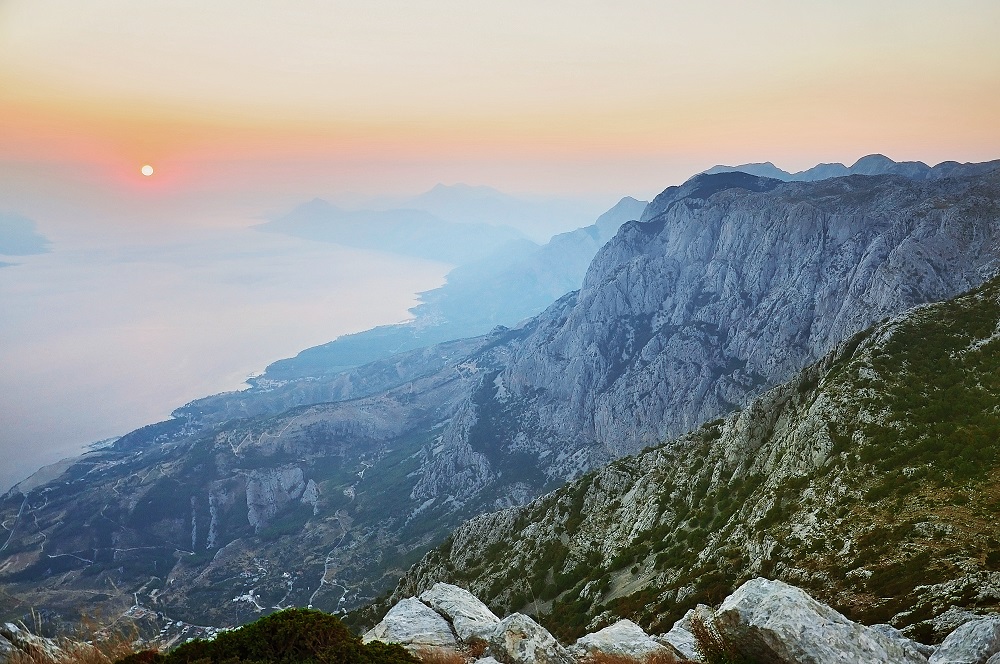 Until recently, data on caves have been limited whereas expert opinion on their archeological potential has never been recorded at all. In April of 2006, archeologists have inspected several caves in the area of the Biokovo Nature Park. On the hinterland side, the inspection covered Raputina cave in Zagvozd, and Gradska cave, Samogorska cave and Matijaševa peć cave in the mountain area of Župa.
Gradska cave is located about 200 metres west from the centre of Župa towards Biokovo Mountain. With its 5 metre entrance it faces south-east. Its overall length is 26.5 metres, and equal width of approximately 2.5 metres on the entrance side where the gradual lowering of the ceiling starts and reaches the end of the cave. The south side of the cave is an elevated stalactite rock formation while the central part of the so-called atrium is divided by stalagmites. In front of the entrance, there is an area bounded by a drystone wall, 5×3 metres in size. This interesting-looking cave found its use in the olden days – the earthenware remains dating back from the Bronze Age serve as proof.
Samogorska cave is situated at the foot of the mountain, around 120 metres east from the mountain trail. The 3.5-metre-wide entrance faces south-east, and a couple of metres from a sinkhole, with a 25 metre diameter. The overall length of its inner part is 20 metres. The length of the flat ground of the so-called atrium is 15 metres, while its width is 7.5 metres which tells a lot about its inhabitation suitability. The remains of pottery from ancient history serve as proof.
Matijaševa peć is located on the left side of the mountain; the distance from the Župa centre is 1 kilometre. Its 2.7-metre-wide entrance, visible from the trail, faces east. It is 12 metres long, with the longest width of 6 metres, and height of 3 metres. As opposed to the Gradska and Samogorska caves, which can be used for inhabitation, Matijaševa peć would not be a good choice due to its downward directed angle of 25% in the direction of the back area of the cave.
Furthermore, the Biokovo Nature Park is located in the area of Makarska and Vrgorac, as well as Brela, Baška Voda, Tučepi, Podgora, Zagvozd, Zadvarje and Šestanovac Municipalities. Since 30.8% of the Nature Park is in the Zagvozd Municipality, it goes without saying that it is of immense significance for the Imotski Region..