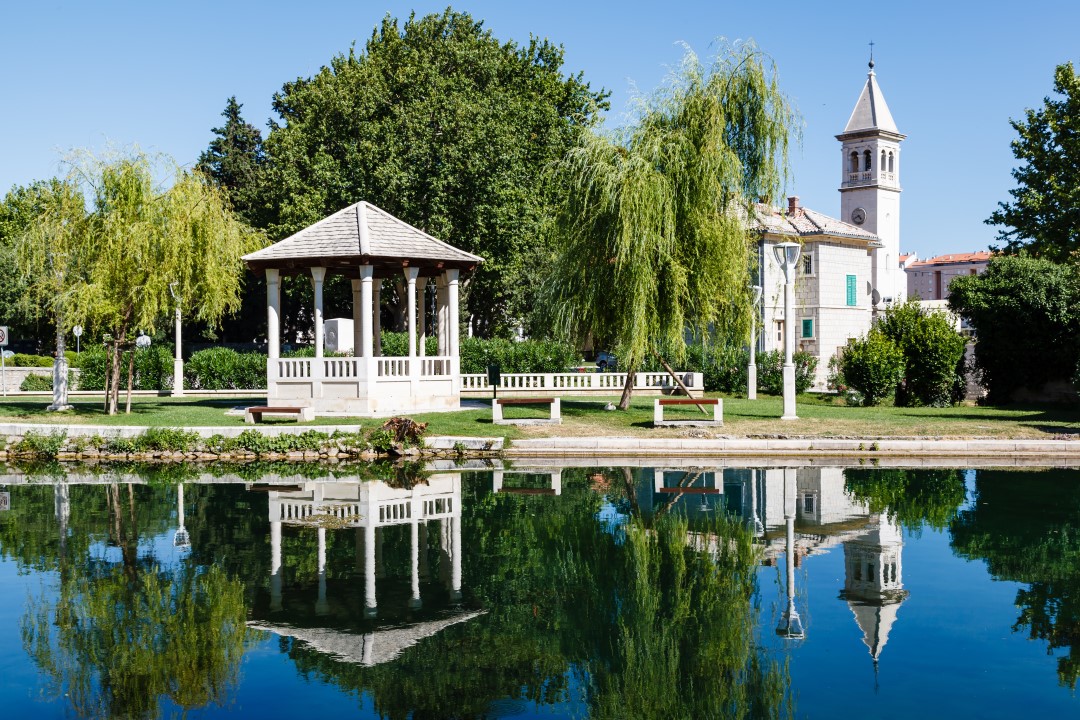 In the arms of the river Jadro and its clear narrow armlets scattered among numerous Solin hamlets some 3 kilometers away from Split, surrounded also by the town of Kaštela and Klis, is where a picturesque little town Solin lies. A place hardly anybody misses to see in Solin, regardless of its religion is Gospin Otok (“The Island of Our Lady”) and Our Lady of the Island Church.
Gospin Otok (according to the historian Ejnar Dyggve) is the oldest settlement in this area. Supposedly, this was the place where Croatian dukes built their residences and fortified them with embankments and walls made entirely of wicker-work. Deep inside in front of the altar of the parish church, and outside it too, is a broad Roman wall. This was all were useful to the settlers who neither had a home or a fortification of any kind when they firstly arrived.In the 10th century on the place of the current parish church of the Our Lady of the Island, Croatian queen Jelena had two churches built: Blessed Virgin Mary’s and St Stephen’s. The remains of the other church are (buried) in front of the parish church and according to Split chronicler Thomas Archdeacon, it used to be a place where Croatian kings were buried. The very church of Our Lady of the Island was discovered in the y. 1898. Famous historian of Solin heritage, Don Lovre Katić was present at the excavations of the former church when sepulchral slab of queen Jelena and of Jelena’s sacrophagus were found, where it says she died in 976. The former church was a three-nave basilica,large almost as the current one. Two or one bell-tower was built as an annexe to the front side of the basilica. So as to avoid damaging, the basilica’s remains are now covered. New church of Our Lady of the Island, simple architectonic edition, was actually built on the foundations of the St Stephen’s Church before the y. 1670, and parish registers of Solin-Vranjic record it was baptized on 8th September. This is also the Town Day and the feast of the Nativity of the Virgin Mary. Simple small church, similar to many others across Dalmatian hinterland was burned down in 1875, and the parish church as we know of today was raised three years later.
These two Jelena’s churches belong to the so called twin-churches (basilicae geminatae), that were mostly raised by the Benedictines in Croatia. The larger one is usually devoted to the Lady, and the smaller one to some saint. According to medieval tradition, kings used to be buried in the same church where they had been crowned, so it is probable that before Zvonimir Our Lady of the Island Church was the coronation basilica. Tradition has it that even 7 Croatian kings were crowned in Solin. A genuine mother of history of these areas from which other historical stories emerged, even the one about the city of Split, was of a particular interest to Don Frane Bulić, who on one occasion said that digging stones is not a waste of time because “from stones comes the history, and from the history awareness.” Let’s make ourselves more aware of the cultural and historical treasuries Solin has left to us…