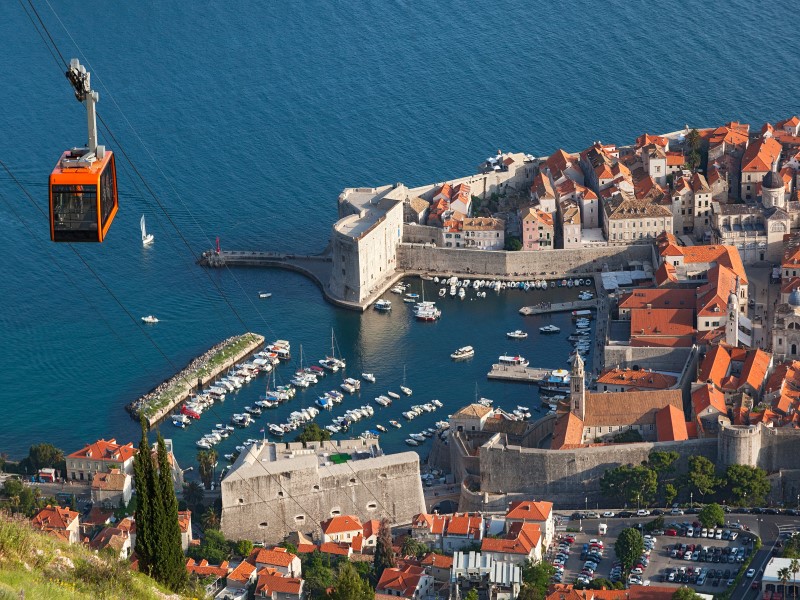 The Srđ Hill stands proud and tall with its 400 meters above the west side of Dubrovnik. A monumental fortress of Imperial is situated there. It was built on this strategic place in 1810 in Napoleon’s time.
This location proved to be perfect for the French to keep an eye on the waters of Dubrovnik and the hinterland.

The hill offers an amazing panoramic view of Dubrovnik and its surroundings which is why this place is featured in many pictures and videos.
Did you know that the first patron saint of Dubrovnik was actually St. Srdj, and not St. Blaise? That’s where the hill got its name from.
In close proximity of the fortress there’s a big stone crucifix, made of the world famous stone from the island of Brač which was presented in 1933 to the City of Dubrovnik by the former Brač-Hvar Archdiocese.
The Imperial fortress exhibits different types of weapons, as well as documents and video presentations of events that took place in the last 25 years.

Close to the highest peak of the Srđ Hill there is a village called Bosanka with approximately 20 family houses and 100 inhabitants.
The hill was once covered in oak and the citizens of Dubrovnik referred to it as ‘Dubrava’. That’s how the City got its name.
Today, the south slope is full of shrub and macchia, and Mediterranean vegetation – wormwood, sage, heather, rosemary etc.
If you plan to visit Srđ, there are several ways to go about it – renovated cableway, new concrete road or on foot from the Adriatic Highway. The slopes of this hill caress Dubrovnik, Rijeka Dubrovačka, Šumet, and Župa Dubrovačka.
We are certain that the Srđ Hill and its Imperial fortress will always have a special place in the hearts of locals and their guests.

Herbal wines (Part 3)
Have we become a generation afraid of fats?