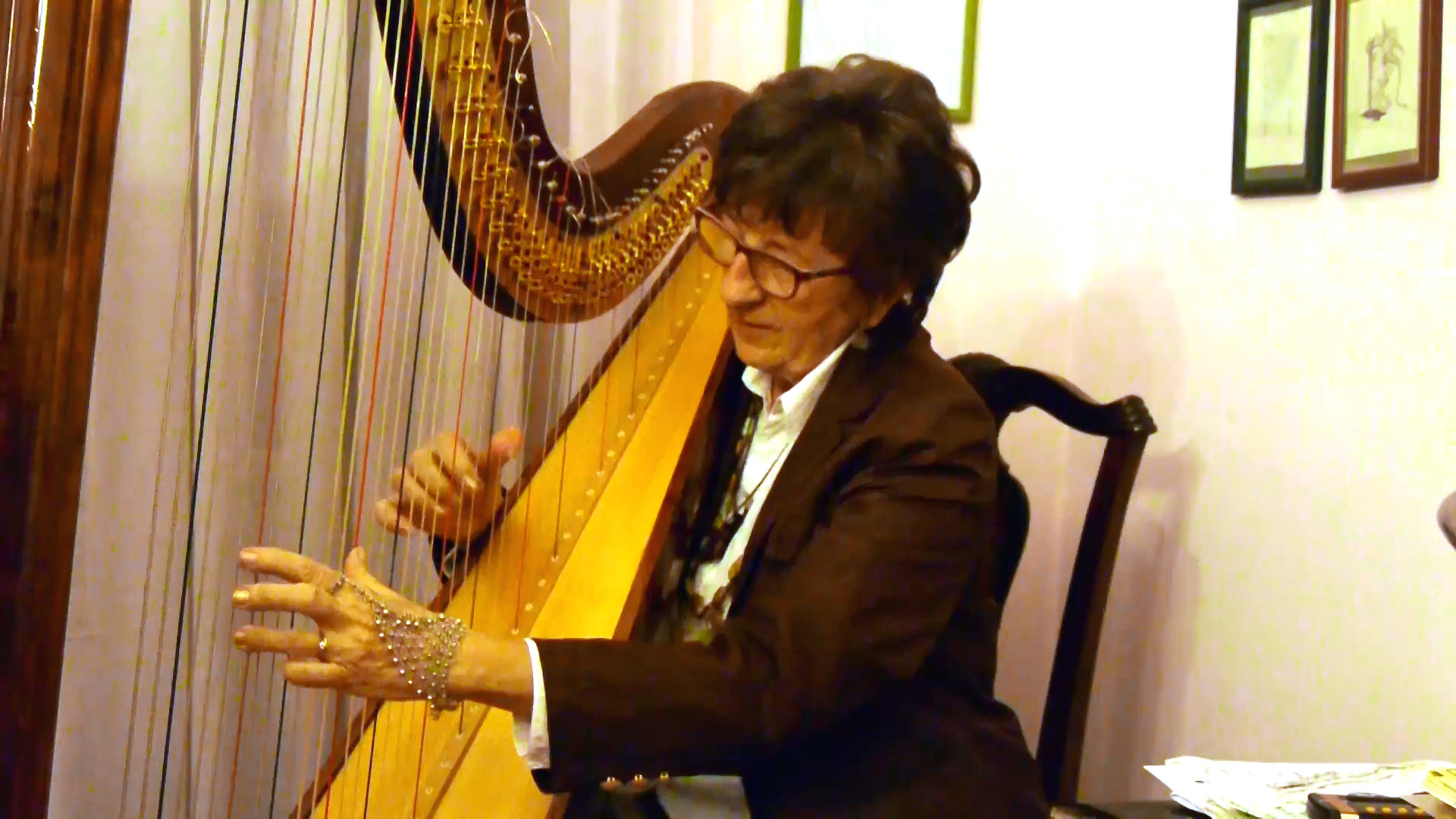 In a pleasant conversation with Terracon News, Professor Marija Mlinar, among other things, revealed how she didn’t plan to dedicate her life to harp, a musical instrument that produces sounds that touch your very soul, and enjoyable atmosphere.
Born in Delnice, Gorski Kotar, Ms Mlinar lives and works in Zagreb, and in a small but cozy vacation home near Turopolje.
We bring you more interesting facts about her life.
– 1956 – 1960 – 5th Lyceum in Zagreb; attended simultaneously primary music school (piano) and secondary music school (theoretical program and harp) ‘Vatroslav Lisinski’ in Zagreb; Academy of Music, University of Zagreb, Pedagogical-theoretical two-year study program,
– 1972 – Graduated from the Academy of Music, University of Ljubljana – harp in the class of Prof E. Portograndi,
– 1964 – 1969 – Zagreb Youth Theater ‘Komedija’, Zagreb; from 1969 to her retirement – solo harpist for the Croatian Radiotelevision Symphony Orchestra,
– 1993 – 2011 – She worked as a docent at the Academy of Music in Zagreb, with small breaks; moreover, she worked with many orchestras and theaters, local and foreign alike, as well as many culture and art associations, chamber ensembles; she participated in many TV productions, movies and documentaries, book promotions, exhibitions, art colonies and poetry recitals.
As an educator, she worked at the Health Education Center and Music School ‘Blagoje Bersa’; held about 100 educational concerts in schools and kindergartens in Croatia; performed in about 10 European countries and the U.S.; worked with many renowned conductors, classical music performers, poets and theater performers.

In an effort to make the harp more popular, Ms Mlinar proudly points out that she was the first one in this region who started performing and writing popular music pieces for harp solos, did charity work and performed in nursing homes, hospitals, institutions for children, people with disability and veterans. Ms Mlinar, as an amazing harpist and a member of an orchestra, performed with big names in the music industry (P. Domingo, J. Carreras, L. Pavarotti, A. Bocelli, Montserrat Caballé, B. Hendricks, M. Legrand); in 2008, she established a Croatian Harp Orchestra ‘1000 Strings’.

In her residence right in the capital’s center, filled with pictures from numerous guest performances, interesting works of art and old furniture, we couldn’t help but notice several harps which stand proud and tall just like their owner. We chose one and nestled by its side while listening to what Ms Mlinar decided to share with us…

Interviewer: ”Since you’re an amazing harpist, you’ve worked with big names in the music industry who performed in Croatia.”
Ms Mlinar: ”Well first of all, as a member of an orchestra, I’ve traveled a lot, and I performed with big names like Pavarotti, Domingo, Carreras, Barbara Hendricks, and many other famous conductors and singers.”
Interviewer: ”How would you describe a harpist? This is a very unusual musical instrument that creates beautiful sounds… Is it hard to learn how to play the harp?”
Ms Mlinar: ”No. I would describe a harpist as a person who has an ordinary job, as any other, whether it’s that of a seamstress, teacher, physician, postman… Of course, you need to have certain predispositions like for example, a ballet dancer has to have a certain figure which is God given… And there’s also will and motivation.”
Interviewer: ”Can I just say you’re also a musical and poetic soul?”
Ms Mlinar: ”All musicians are poets in a way, hidden… I think a musician is more sensitive than your average person. So it’s kind of expected for us to be interested in poetry and art.”
Interviewer: ”Is it true that you formed a harp orchestra?”
Ms Mlinar: ”I’m actually a member of the Zonta club that tries to advance the status of women worldwide and does charity work as well. So, encouraged by Zonta, I formed a Croatian harp orchestra. We organize a concert every year. We’re unique in this part of Europe. You see, there are not a lot of harp orchestras simply because it’s very difficult to transport the harps, find a location to practice which is why there’s shortage of harp orchestras. As I’ve said, we’re the only ones in this region, and for 9 years now, we’ve been organizing a charity concert which makes us very happy because we’re doing something nice, and we like to perform together too.”

Our request to play a piece was granted in no time.

Can we ask you to play something for our readers? We’ll try to guess what it is while we enjoy your performance.
I won’t do classical music because there are other fellow musicians who are better at it than I am. And also, because this is a video for your readers, they probably see the harp as a classical instrument but harp can be used to play popular music, and folk music which I’m a fan of. That’s why I chose something from the Mediterranean.
The floor is yours.
It was very nice. And although we can’t see Šolta from your window here, we can picture it thanks to your musical performance. Thanks. You see, Dalmatian songs, as well as many other, have a lot of potential, and sound good on the harp.

Her vacation home in the middle of a forest area near Turopolje is just the right place to relax your soul. Ms Mlinar visits it almost every other day, and enjoys working in the garden, doing different jobs around the house and welcoming dear friends who can’t wait to accept her invitation.

Ms Mlinar: ”Nature cures the body and soul. I like to spend a lot of time surrounded by nature, and whenever I have free time, I come here. You see, nature makes us feel closer to our own being. And even to our children. And a fellow man. Closer to God, closer to all that matters. I think differently when I’m here. I feel like a different person. And I think everybody feels the same way, it’s just that maybe they don’t see it.”
Interviewer: ”You’ve followed your own style for years. Experimenting with trees, stone… You own a garden, a lot of small details that make you whole, so to say.”
Ms Mlinar: ”I didn’t have a plan. It came to me spontaneously. It had to do more with the financial aspect of things but also my style and what interests me. So you end up collecting certain things for years. I don’t like plastic although it’s part of our daily lives and can come in handy but I managed to avoid using it simply because I don’t like it. At the same time, my garden which is really important to me, was envisaged as an ecological garden when that term wasn’t as familiar as it is today. I believe that every person who at least has an ounce of determination and 20 square feet should plant something. There’s a Chinese proverb that goes something like this – If you want happiness for a day – drink something; if you want happiness for a year – get married; if you want happiness for a lifetime – plant vegetables and take care of your own garden.”
Interviewer: ”Yes, we noticed you have a lot of interesting things in your garden. How long did it take you to decide to leave Zagreb? Most people who own vacation homes here live and work in larger cities. And when somebody comes to your place, there’s a sense of calm, birds chirping, and even the sun is up in the sky on a November day, everything seems just right.”
Ms Mlinar: ”Well yes, you see, Nature heels. I think that every person has this need to experience Nature. It’s just that a lot of people don’t see it, or because of the fast paced lifestyle, they don’t have time to stop, think for a minute and take a different route. You know when people for example, come to the seaside, everyone is mesmerized by the sea. Nature is beautiful everywhere. Somebody prefers a hill, another person a lake but Nature is beautiful no matter where you are.”

ear Terracon News’ Readers, it’s been a pleasure and privilege to spend some time with Ms Marija Mlinar, a great musician and very outgoing person.
Make sure you check out the entire interview and video that will be featured on Terracon TV. Until then, enjoy the beautiful sounds of yet another magical harp performance.

View of St. Francis Church and Monastery in Split
U jednom danu…