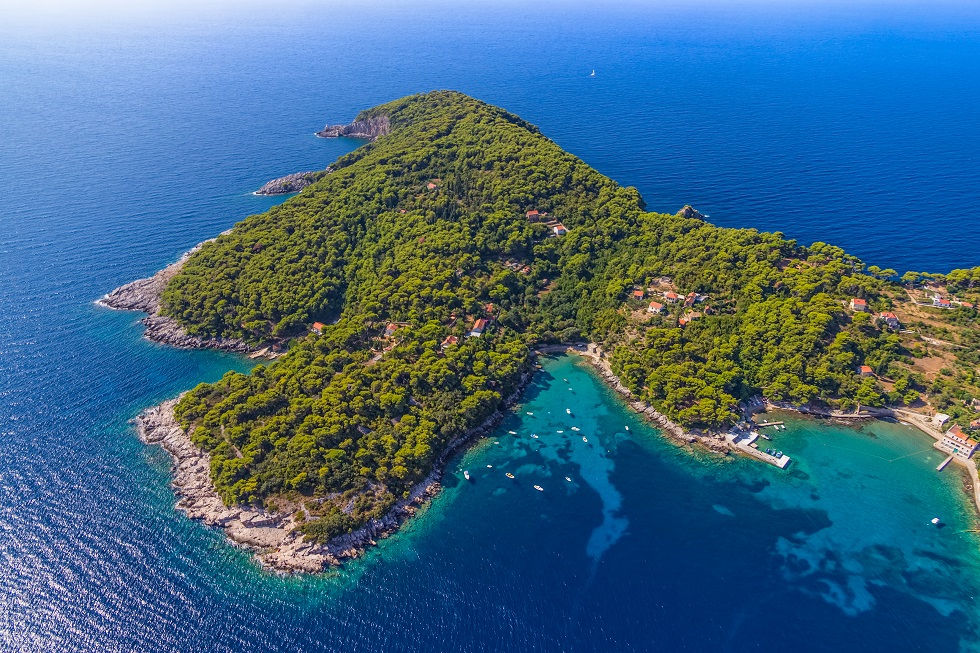 Koločep (locally known as ‘Kalamota’) is one of three inhabited Elaphiti islands and it is also the southern most inhabited Croatian island. It is situated 3 kilometers away from Dubrovnik its west side, and on the west side from Koločep is Lopud, and Saint Andrew. In the most southern part of Koločep Channel, the distance between the land and islands is 1 kilometre.
Koločep is one of few, if not the only Adriatic island with two names. Local people usually call the island by its unofficial name Kalamota, and themselves Kalamotes. In the past, the island was named Calamotta, most probably of Greek origin, since the Greek word kalamos denotes a fishing stick and Kalamotes also. The island is famous for its numerous olive trees and pines. Interestingly, there are no roads, except the only significant cemented road which connects two settlements, wide enough for the pedestrians to pass, but not for cars. Two settlements can be reached in a fifteen minute walk through abandoned agricultural areas. The island has a ferry connection with Dubrovnik.
Tourism, olive-growing, viticulture and cattle-breeding form the economy of Koločep. Many economic industries gave way to tourist industry, especially viticulture, cattle-breeding and fishing. The island has no registered professional fisherman, while once even existed a fishing cooperative society.

However, cultural features of the island are very interesting. There are 17 cultural monuments of exceptional importance, mostly smaller churches and chapels, all older than 16th century. Additionally, a majority of residential and fortification objects represent valuable and very attractive examples of the ancient architecture.
Above the harbour Donje Čelo lies a fortress Kaštio. Its upper part is completely ruined, but 30m long and 3m wide basements are preserved. Above the main church is a Toreta tower, 14m high and 4m wide from the each side. Mansions, fields and vineyards of Koločep were mostly in the property feudal families Đorđići, Zamanje, Ranjine, Držići, Sorgo, etc.
The largest and the most important church on the island is dedicated to the Blessed Virgin from the 12 or 13th century. Its interior part is 13,6m long (without the apse) and 5m wide. The most preserved chapels are: Saint Anthony chapel in Kaštio, the Holy Trinity in a hamlet Mačus opposite from the main port in Donje Čelo, Saint Nicholas at the graveyard and St Anthony of Padua in Gornje Čelo. In the area called Ispod sv. Petra used to be a chapel dedicated to saint Peter and for some time its director and chaplain was famous comediographer from Dubrovnik, Marin Držić. In St Nicholas chapel at the graveyard were discovered frescoes that indicate the chapel is even older than it was believed.

Lavender – aromatic, calming and delicious
Čilipi – the soul of traditions in Konavle