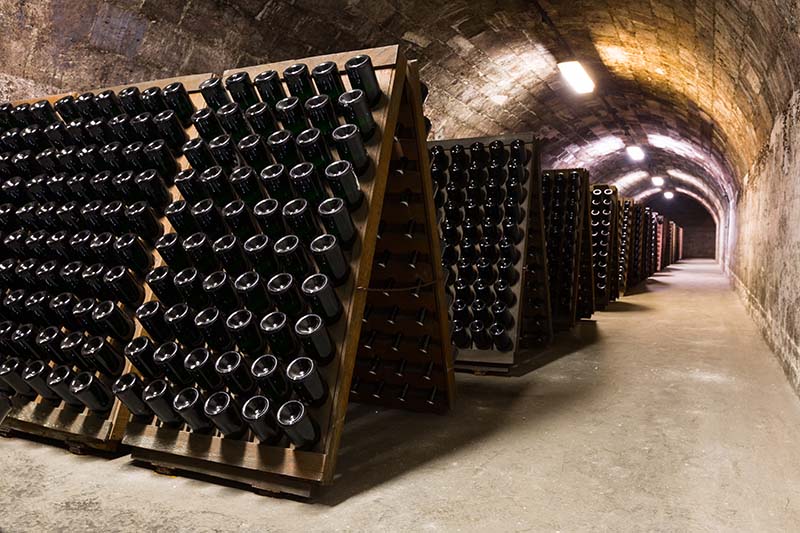 Considering how often people mix champagne with wine speaks volumes about the poor wine knowledge. For this reason it is important to note there is actually only one champagne and this originated in the Champagne region of France due to the efforts of French Benedictine Dom Perignon in 1668 who employed the so called traditional method of champagne production. All other sparkling wines that are produced either by traditional or some other method outside the Champagne region of France are called sparkling wines.

According to some records, bubbling wines existed as early as in the time of the Roman Empire. They recognized that these wines, once opened and poured in glass, release the air and make the wine bubble as that air ascends. However, when it comes to sparkling wines, many still consider Dom Perignon as ‟the father of champagne”. In his time a great problem was a secondary fermentation, also known as bottle fermentation. When the weather turns cold in fall, the fermentation process would stop with certain amount of the unfermented sugar being left in the wine. Afterwards, this wine would be bottled.
With the arrival of spring and warmer temperatures, yeast would activate resulting in another (second) fermentation of the remaining sugar and production of carbon dioxide which would be released only after the bottle is opened, making a cork to fly out the bottle and in worse case, the bottle would burst.

Dom Perignon is also a person who is attributed to be the first person to study the fermentation process of secondary fermentation. He concluded that wine has not completed the fermentation process before bottling, which in turn made it bubbly. This discovery has been followed by a series of scientific discoveries that were essential for modern production of sparkling wines.
All in all, Dom Perignon was the first person to ever produce white wine made of red grapes which was very significant, given that two out of three wine sorts that make up the most of wine production are red. He was also the first to introduce wine coupage (blending) from different areas (and not only from one vineyard) that occurs before wine is pressed with an aim of producing higher-quality wines.
Even though he attempted to improve the quality of wine from the Champagne region, he still cannot be regarded as the creator of bubbling wines. Quite contrary, at that time, secondary fermentation was considered a flaw so Dom Perignon worked relentlessly precisely to solve this matter. Additionally, certain evidence show that English scientist Christopher Merret was first to record addition of sugar to finished wine to induce a secondary fermentation.
All being said, even though Dom Perignon is not ‟the father of sparkling wines”, many methods that he introduced have improved wine production process and quality.
Croats started to produce bubbling wines in the late 19th century. Numerous wine sorts and astuteness of winemakers were enough to stimulate this type of wine production. Although this extraordinary drink is gaining on its popularity in Croatia, still, it is mostly consumed at various festive occasions. Let’s just add that Croatian sparkling wines produced by traditional method do not fall behind the best ones in the world in any aspect of a wine.