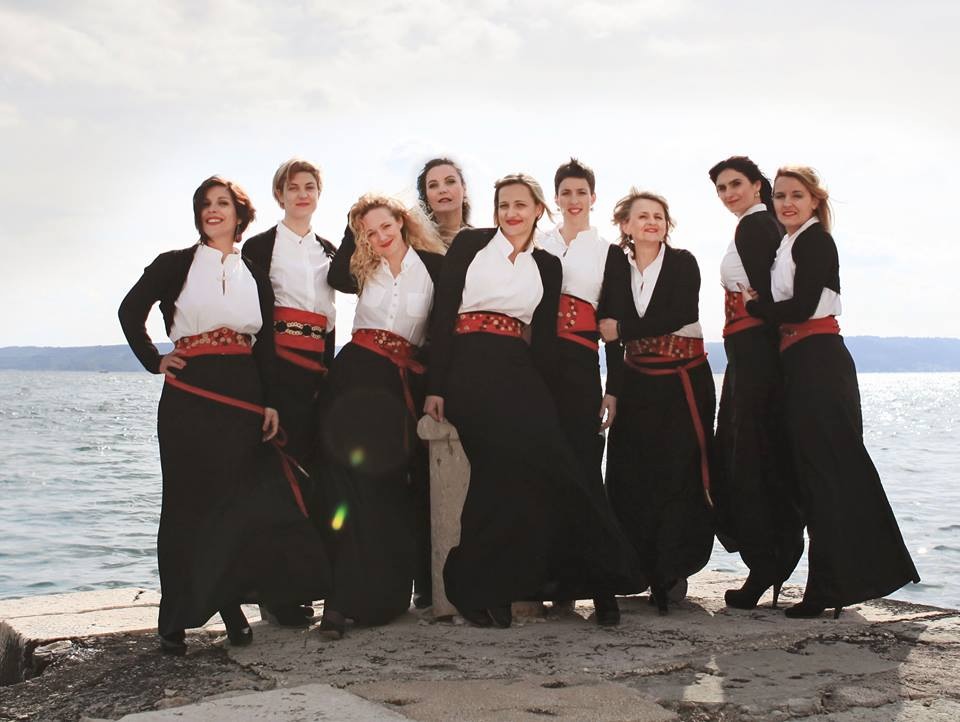 Female klapa (traditional group of a cappella singers in Dalmatia) Štorija from Kaštel Kambelovac was established in 2009. Štorija is new in the klapa world whereas its girls have been a part of this world for more than ten years. The klapa consists of 9 girls: Katja Marketić (1st soprano), Franka Barić, Paulina Rončević, Ema Kuzmanić (2nd sopranos), Anita Zorica, Ana Brčić (1st altos), Ines Grgić and Josipa Podrug (2nd altos), with Professor Jurica Karuza as their manager.
During their five years of performing together, they took part in various festivals (Omiš, Sinj, Split Festival), charity concerts, etc. They aim to nurture the original klapa singing as well as various interpretations. In their first year, they won 3rd place – judges’ choice at the Kaštela Dalmatian Song Nights. The year 2013 plays an important role in their music story set in Blato on the Island of Korčula and then continues to the 47th Omiš Festival – Popular Composition Night where they won the only prize given by the judging panel – Zlatni lipin cvit. Their evening concerts represent a true enjoyment for the senses and the soul. Their pride and joy is their first album Oluja, čežnja i mir /Tempest, Longing and Tranquillity/ released on the Scardona label.
In 2013, at the traditional concert organised every year at Dom sportova, Zagreb by the klapa Intrade and Tomislav Bralić with a mission to bring klapa singing closer to the citizens of the Croatian capital, many famous performers took part (Vanna, Miroslav Škoro, Oliver Dragojević), as well as klapa Štorija who was well-received by everyone present. The girls won the hearts of the audience at Dom sportova with their performance of an a cappella version of the song Zemlja by Mojmir Čačija, and a interpretation of the Nismo mi bez cilja song, accompanied by maestro Jurica Karuza on the piano. A big round of applause at the end showed how excited the audience was.
Moreover, among numerous klapas at the International Klapa Festival held in Perast from 27 – 29 June 2014 they won two awards. On the first day of the competition they won 1st place – judges’ choice, and the audience award for the Best Female Klapa of the 2014 Festival. On the New Composition Night, Štorija performed a song by D. Tambač, lyrics by J. Fiamengo, and won the Best Composition and Performance Award.

We would like to see this success story continue and the year 2015 full of well-deserved awards.
.