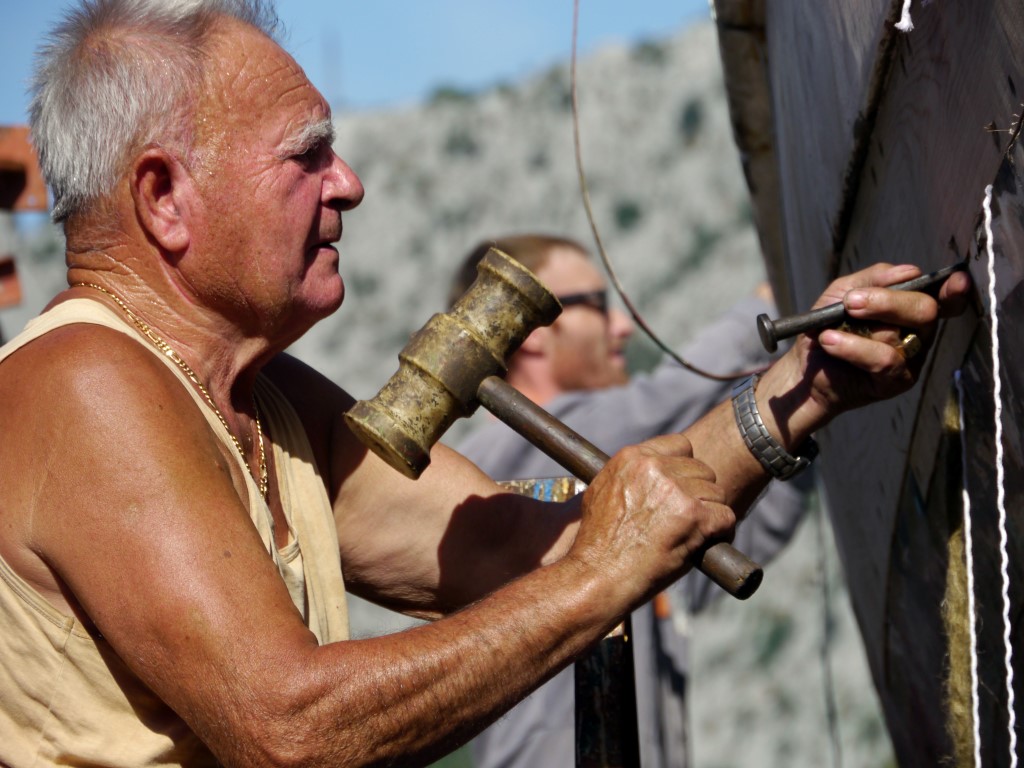 Loger is 90 years old shipyard in Omiš, now in the property of Frane Milina from Korčula. He stareted his shipbuilding carrier in the shipyard of Omiš some 50 years ago, i.e. since 1955.Since then he is engaged exclusively in wooden shipbuilding, in designing new ships and repairing the exisitng ones in the entire Dalmatian area.

His most famous recent ships, aimed for tourist activities, are sailing boats Dare (22m), Sagena (26m) and Mlini (26m). He has also built a replica of 16th century ship, the type of Dubrovnik galleon ship, 30m long, for the town Dubrovnik and it is the first ship of this type ever built after 400 years.
According to 80-year old mr Frane Milina, the shipyard could, if a client required, also design a complete documentation for ship building also providing for high quality building material of Slavonic oakwood. “I do all the work along with my two shipwright sons”, emphasises mr Frane, who being in good health, still wishes to put his efforts and energy into repairing, amending or building ships.
Once you pass Omiš on the line from Split to Makarska, it is impossible not to notice a small shipyard situated right beside the very Adriatic Highway several decades ago. Ever since then it proudly resists bora and south that relentlessly beat it during winter months.
Even though this modest shipyard can receive only 2 larger ships at once, nevertheless, you can always find there its heart and soul of traditional shipbuildin of the wider area of Omiš – a master shipwright mr Frane Milina. He moved from Lobarda on the isle of Korčula in 1955. A stonemason’s son and a father of four sons says how his work means everything in his life and that he could not even imagine what would his day look like if he did not go to his small shipyard and salute his “wooden pets”. He is now 80 years old and would, if this could be possible, build ships even 80 years to come.
Terracon new has visited mr Frane Milina and recorded a story…

Interviewer: Mr Frane, your shipyard’s name is Loger, tell me how did it got this name?
Mr Milina: Logger is a local, Adriatic type of a ship, and in my opinion, this is the most beautiful one. Also, I’ve spent most of my carrier working with this type of ship. There are also other loggers in the Adriatic area, and some of them are very old.
Interviewer: You are actually from Lumbarda (island Korčula), but here you are in Omiš. How has this happened?
Mr Milina: By pure accidence. I wished to be a sailor and go abroad where many of my family members still live, but here I am, anchored here, as one famous song says…
Interviewer: Could you tell me what is the most beautiful ship you’ve ever built, or this is impossible for you to decide?
Mr Milina: We used to build many large ships. Sadly, this is no longer the case. It is difficult for me to decide. They are all like my family to me. It’s like you ask me which of my children I prefer and love the most…You are proud of every ship you’ve ever built or repaired.
Interviewer: Yes, I understand. You’ve built replicas also?
Mr Milina: It’s true, we’ve made a 30 m long ship, a 16th century Dubrovnik galleon type, later called Tirena. We had some unclear picture provided to us by the Maritime Museum and we haven’t even been sure if this was the picture of the original ship. Stil, the ship was truly astonishing.
Interviewer: You are famous for your shipbuilding work. Can you imagine yourself doing anything else?
Mr Milina: No, I would feel lost. I am master at my work and couldn’t even think of doing anything else, even though this is a very hard work.
Interviewer: Is it really?
Mr Milina: Oh, yes. Nowadays, different cranes assist us for difficult tasks, but in the past this wasn’t the case. We used to do everything manually. Love for the ships and the sea is what drives me further. I’ve never lived anywhere else, except near the sea. I’ve even served army in Boka and I still work, ever since 1948 when I started this craft. I’m not sure how much longer will I be able to do this job, hopefully as longer as possible. Since I am from Lumbarda, this only comes natural to me. After all, Korčula passed on the secrets of shipbuilding trade to Venetians and Greeks. Nowadays, nobody works with wooden ships.
Interviewer: You are more than 80 years old now. Where does the energy and inspiration for your work come from?
Mr Milina: I honestly don’t know. My mother was 95 when she died and I used to tease her how I wished I could live as long as she so I always joked how it would be good if she could give me some sort of a passing ticket for a longer life on the earth.
Interviewer: When we were arranging this interview, you worn me you have lunch exactly at noon. Do you always pay attention to these rituals and habits?
Mr Milina: Well, I live nearby and I’m used to that rhythm so it is not unusual for me to watch midday news and have lunch. I take care of myself and do not deprive myself of anything. Luckily, my health is good.
Interviewer: Here we are, near this boat, is it being repaired?
Mr Milina: Yes, this boat needs to be restored every year in order to function properly.
Interviewer: You’ve said this is a very demanding job. What do you mean by that?
Mr Milina: Yes, this is really a hard job. You need to train yourself, this is a process which lasts long and costs much. You see, you need different tools and that costs a lot. Also, sometimes you need an assistance from a plummer or electrician, for instance. All that raises costs, and tools are not something you can borrow, you must have it, the whole package, otherwise you cannot perform this job at all. I used to go to Austria just to buy tools. Luckily, everything is available now, the only thing you still cannot buy is money…
Interviewer: You are more than 50 years in this business. Is there anything you wish to do, but haven’t’ managed yet?
Mr Milina: Yes, I would like to make a ship from the13/14th century, if the strength permits me, but I am not sure whether I’ll succeed at this. I would like to do this for Omiš so I can honour in someway this town which gave me so much even though I was not born here. I was even awarded by the Croatian Employers Association and I am respectable here and welcomed, so I wouldn’t trade with anyone else or do anything else but this job in this town precisely – Omiš.
Interviewer: Well, mr Frane, thank you very much for your time.