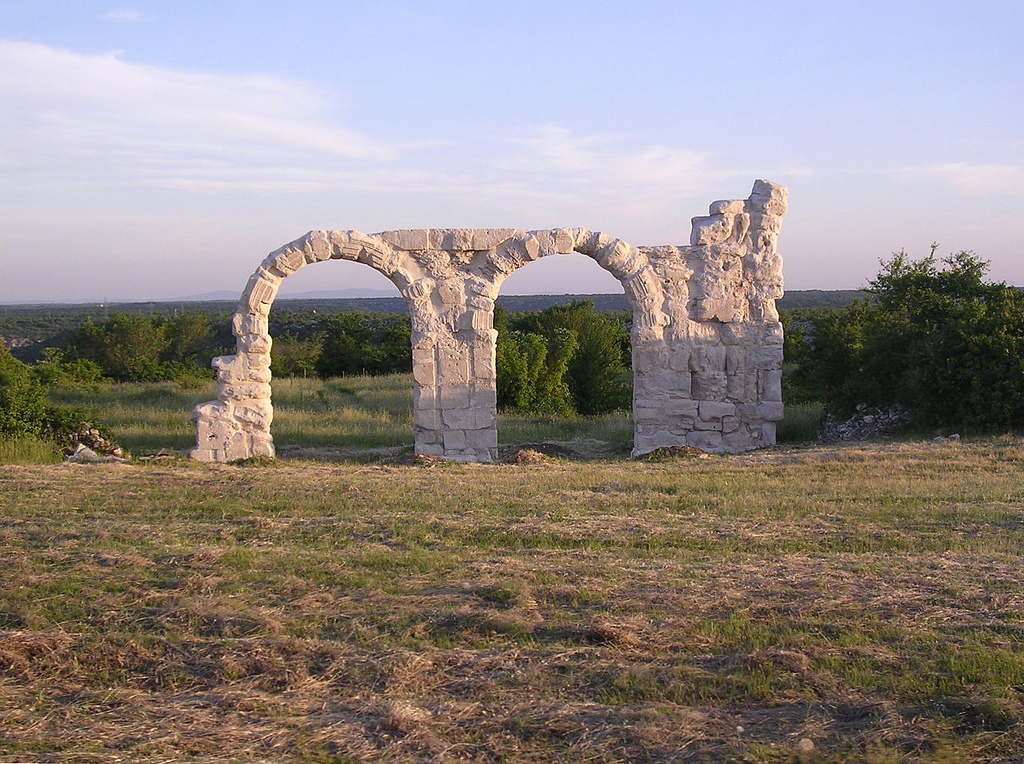 A long time ago, there was a Roman military camp called Burnum located near Kistanje. Apart from its defense purposes, it slowly developed into a settlement.
Its remains can be found in a place called Ivoševci, 19 km from Knin. This archaeological site, constructed by the emperor Claudius and expanded by Vespasian, is divided into 2 units. If you take the road from Knin to Zadar, when you reach the 19th kilometer, on your left side you will be able to see two arches – most likely parts of the main entrance to the Roman military camp Burnam, colloquially known as the Hollow church. The Principia was the command building but also the administrative and religious centre of the Roman military camp. It was located on the crossroads of the two most important streets in the camp – via principalis and via praetoria. If you look beyond the arches, you will see the canyon of the Krka River with a massive natural calcareous sinter surface which forms a lake when you go upstream, and the Manajlovac waterfall if you turn the other way.
The other site, located on the right (west) side of the road, houses an amphitheatre.
The first systematic archaeological research of Burnum, i.e. the Principia, was conducted by the Austrian Archaeological Institute Vienna during 1912 and 1913. In 1973, the Institute together with the Archaeological Museum in Zadar organised a revision of existing research of the Principa and water supply system research in Burnum. Nowadays, more recent archaeological research are being executed between the Archaeology Department of the University of Zadar and Bologna and the Drniš Town Museum.
Many visitors of the Krka National Park want to see Burnum; however, since it is located far away from the Park’s main attractions, this historic site can be visited as a part of a private tour.