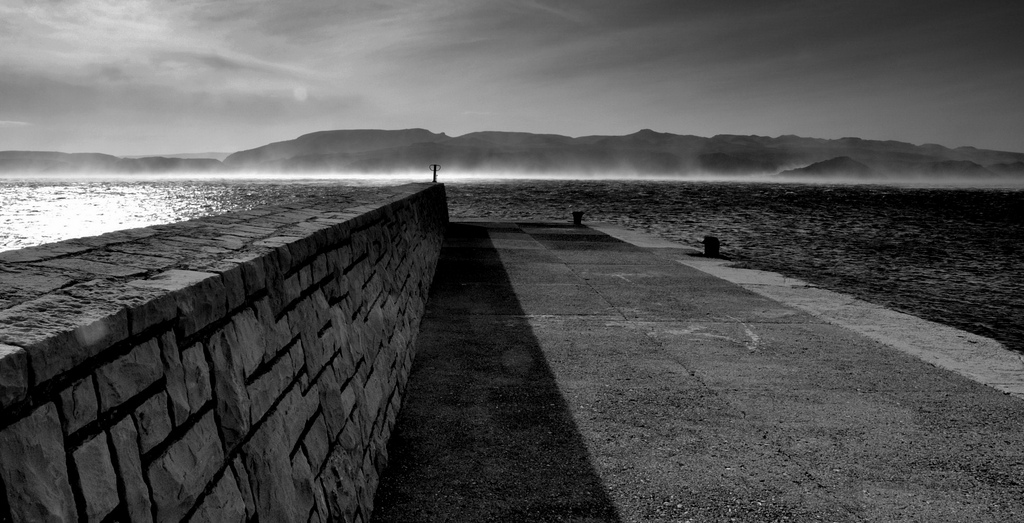 Bora is a very strong, gusty wind which mostly occurs in cold season. It is typical for northern area of the eastern side of the Adriatic Sea, but it can also occur elsewhere on the Earth.
It is a life-changing natural phenomenon since it largely affects the lives of people and vegetation, living organisms in general. Bora is a northward wind, blowing down the mountains in its main direction to the sea. Bora is a stiff gale, especially where it flows through the coastline mountains.
Bora occurs when cold air from the hinterland breaks through steep chains of mountains and small narrow bays passing downward to the sea so that the current wind speed can periodically be very high. It has a strong vertical (down) component of movement (also called a fall-wind or katabatic wind) and unsteady, turbulent wind current. Changeable nature of the wind’s main current is seen in the way it blows – in interchangeable wind gusts whereby the frequency of gale force bora winds varies, meaning that the weaker and stronger hits (gusts) interchange with shorter or longer pauses in-between during which the wind force significantly weakens.

General preconditions for bora to occur are related to a specific topographic configuration, namely soil configuration (relatively steep slope which lies at the edge of a larger mountain) which needs to relate two climatologically different, incoherent areas (spatial cold terrestrial hinterland and warm sea).
Bora can last up to few days. It usually starts abruptly and slowly abates. At times, gale force winds can exceed 20 m/s (72 km/h) which in Beaufort wind force scale corresponds to ninth degree, and sometimes exceeds 50 m/s (around 180 km/h). Certain wind gusts often and significantly change their force and direction so that their direction can sometimes be different than the general, main wind current.
As rushing down to the sea, bora sets the sea surface in motion thus making the sea very restless and dispersing it into small drops which create a so-called “sea smoke” which causes salt sediment on the surface of objects and plant covers and heavily destroys vegetation. Bora is a cold, dry wind so it reduces temperature and humidity (moisture in the air). This wind is also interesting because, due to dynamic heating of the air while lowering down, it prevents condesation of water vapor which is why the weather is always clear (with no clouds) with no possibility for precipitations.
The strongest bora wind in Croatia was recoreded from the 22 to 25 Decemeber in 2003 on the King Tomislav Motorway from the road hub of St. Rok to the road hub Posedarje. At the time, bora wind gust reached 304 km/h. Provided that bora wind gusts are not too strong (hurricane like), from physiological-therapeutic point of view, bora beneficially influences on organisms since constant rich circulation of fresh mountain air intensively mixed with the warm sea (of course, if the temperature reduces under certain circumstances) also refreshes organism. Simultaneously, dry air enables better transpiration. In the process, some influence will also come from the content of dispersed sea salt and iodine from the air and to some extent its ionization. Only in cases when bora is extremely cold and too strong, it can become physiologically intolerable and dangerous. Still, bora as the cold wind is celebrated in many Dalmatian songs, some of which have even won prizes and belong to one of the most memorable songs ever performed at Croatian fun music festivals.

Additionally, there are some folk beliefs related to this wind like legends. For instance, one of them is about Bora, a young girl, the main protagonist of the novel Mountains (Planine) by Petar Zoranić. His story narrates about a young and very beautiful girl from a noble family, but also very haughty. Because of her arrogance she turned down all the wooers. Still, she praised her beauty too much so once declared how she is even more beautiful than all immortal fairies. God did not sympathise her for that. Legends say that when ever some woman thinks of similar thoughts as Bora, she (Bora) takes a deep sigh remembering her once a happy life. Her deep sighs actually create heavy and cold wind – bora .
The other legend describes Bora as a girl who struggles and injures herself by walking on roofs and trees. If somebody curses the wind (her), she would take a sparkle from chimney in order to set that house on fire and revenge herself. Therefore, according to traditional belief, one should never curse bora.

In conclusion, here are some famous sayings on bora:
Born on Dinara, baptized in Makarska and married in Senj (refers to bora’s strength, from Dalmatia);
Bora is born in Senj, rules in Bakar and celebrates in Trst. (northern Adriatic coast)

Larine priče
Why do we crave food?