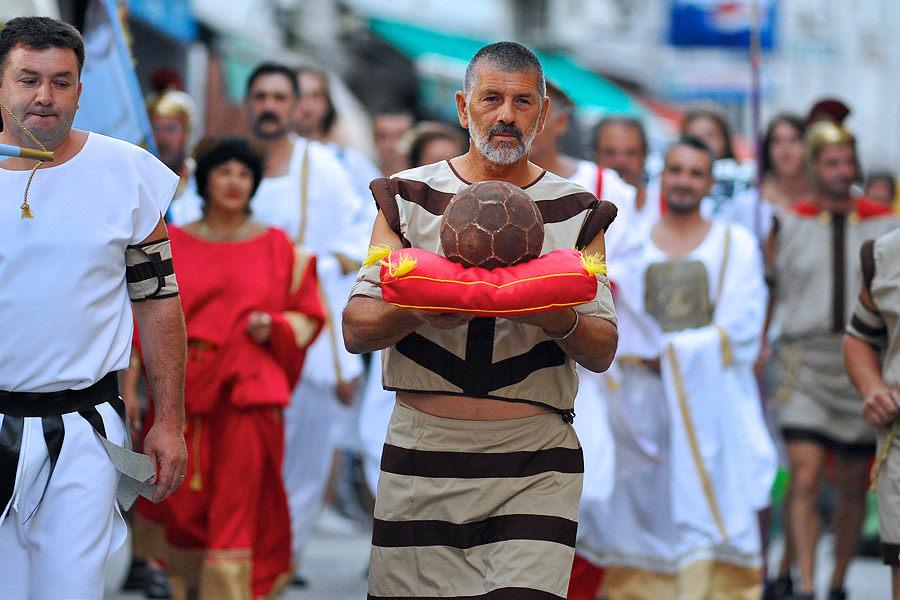 This is how the story goes. A tombstone in the shape of a seven-year-old Roman boy, Gaius Liberius, who carries in his hand a round object intersected by hexagrams, in other words, a real leather ball, is thought to be solid proof of the fact that soccer first appeared in Europe, that is, in the Cetina Region.

This monument of sorts, made of limestone, was found in Tilurium, on the Gardun site, and it dates back to the 2nd ct. Today, it is a part of a stone house facade in Vrlička Street, Sinj. The middle part is a round medallion framed with ornaments which features a very highlighted portrait of the deceased carrying the said soccer ball in his right hand.

Soccer was popular in Gardun among the Roman military and sons of people who were higher up on the food chain, but the sport was originally played among the Dalmatae long before the Romans came along, the proof of which is the fact that nowhere in the Roman Empire territory, except for Gardun, traces of this sport were found.

To make things more interesting, it seems that the Dalmatae managed to make the Romans fall in love with the sport which is how it grew in popularity among this nation as well. Literary works of old Roman authors, such as those of Seneca, describe a soccer match which clearly shows that this sport was widely known in those days.

If you’re still not convinced this is how the story of soccer began, then how do you explain that so many excellent soccer players come from Sinj, Trilj and the Cetina Region, who just like the genius of Maradona, Messi or that of Ronaldo perform miracles on a soccer field.